The first stones of the Borgia Castle where laid at the beginning of the 14th century, period in which it was only a sight tower. 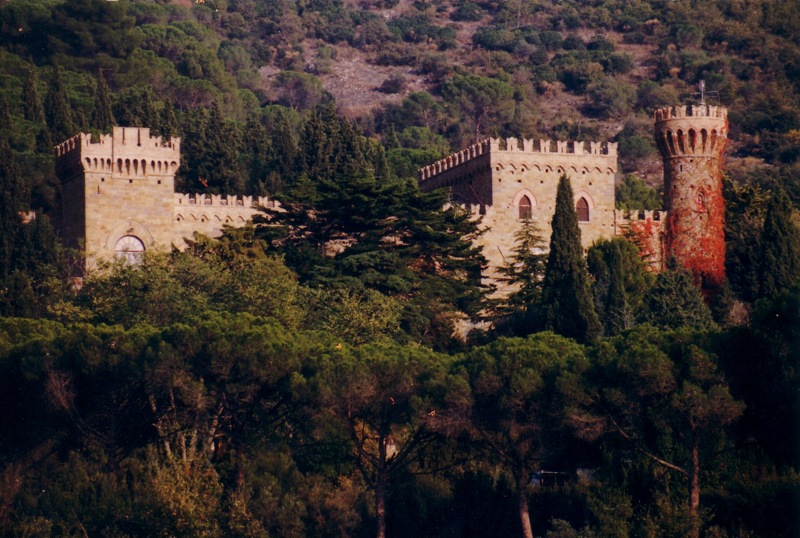 Few words about the Borgia family:

The Borgia, also known as the Borja, were a European papal family of Spanish origin; they became prominent during the Renaissance. The Borgias were patrons of the arts, and their support allowed many artists of the Renaissance to realize their potential.
The Borgias became prominent in ecclesiastical and political affairs between the 1400 and the 1500. They produced two popes during this period, Alfons de Borja who ruled as Pope Calixtus III during 1455–1458, and Rodrigo Lanzol Borgia, as Pope Alexander VI, during 1492–1503. Today they are remembered for their corrupt rule during the reign of Alexander VI. They have been accused of many different crimes.
While a cardinal, he maintained a long-term illicit relationship with Vanozza dei Cattanei of the House of Candia, with whom he had four children: Giovanni, Cesare, Lucrezia, and Gioffre. Rodrigo also had children by other women, including one daughter with his favorite mistress during his papacy, Giulia Farnese.
Several rumours have persisted throughout the years, primarily speculating as to the nature of the extravagant parties thrown by the Borgia family. Many of these concern allegations of incest, poisoning, and murder on her part; it is rumoured that Lucrezia was in possession of a hollow ring that she used frequently to poison drinks.
However, no historical basis for these rumours has ever been brought forward, beyond allegations made by the rivals of the Borgias.

In the 15th century under the Borgia’s domain, the construction was transformed in a fortified advance post. That area was at that time close to the border of the papal state and site of many wars.
At the end of the 18th century the construction was transformed into a more comfortable residential building, very similar to the castle today. The last member of the Borgia family who owned the castle is Tiberio Borgia. There is a stone in the chapel of the castle where it is impressed a prayer where Tiberio Borgia thanks the Holy Mary for surviving in the lake after almost drowning in it. After the Borgia family two other families followed as owners of the castle.  In 1932 the castle and its big property around the lake was aquired by the family of the owner.
Unfortunately from the 1941 to 1944 the Castle was a war’s site and transformed into a German’s head quarters and point of resistance against the English army. At the end of the war, once again restored, it has been used as a summer holiday residence for the owner’s family.
Only in 1995 its doors have been opened to the public and rented out for vacation rentals.